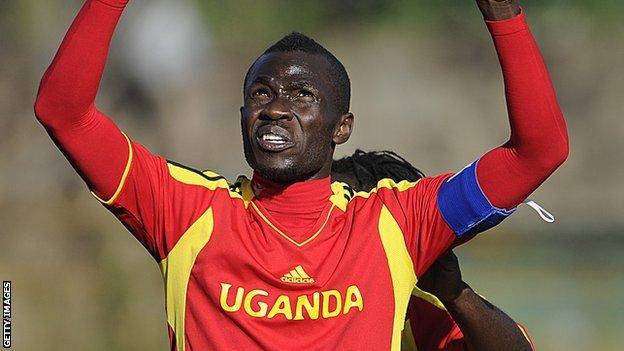 BBC Sports
Uganda forward Emmanuel Okwi has had spells playing in Tunisia, Denmark and Tanzania
Uganda moved to the top of Group E in Africa’s 2018 World Cup qualifying campaign with a 1-0 win over Egypt.

In a later game on Thursday, Guinea beat Libya 3-2 in Conakry.

Uganda’s Tanzania-based forward Emmanuel Okwi scored the only goal of the game six minutes after half-time.

The 30-year-old cut into the area from the right and after some fancy footwork drove the ball low past veteran Egyptian goal keeper Essam El Hadary to give the Cranes the lead.

It is a first win for Uganda over Egypt since 1965.

The last time the two met competitively was at the Africa Cup of Nations earlier this year in Gabon with Egypt emerging as 1-0 winners., as they went onto finish as runners-up.

Mahmoud Kahraba thought he had given the visitors the lead after 35 minutes but his effort was controversially ruled out for offside.

Replays showed that neither Kharaba nor Trezeget, who set up the shot, were offside when Mohamed Salah lifted the ball into the area.

Most of Uganda’s threat in the first half had come from Okwi, who had forced El Hadary into tipping the ball over the bar with a cross-cum-shot.

Liverpool’s Salah had one of the best chances to equalise for Egypt but his close-range header was well saved by Denis Onyango.

Deep into the seven minutes of injury time, Salah had another chance to score but he shot into the back of his team-mate Ahmed Hegazi and the ball went out for a goal kick.

The two sides meet again in the Egyptian city of Alexandria on Tuesday.

Uganda now have seven points from three matches so far – one more than Egypt.

Ghana, who have a single point, play their third qualifier tomorrow against visiting pointless Congo Brazzaville.

Guinea had taken a swift 2-0 lead in the match which featured two teams searching for their first points of the campaign.

In the second half, RB Leipzig’s Keita – who this week signed a deal to join Liverpool in July 2018 – had a chance to make it 3-0 to Guinea.

He stepped up to take a penalty, but he missed from the spot and was almost left to pay for the error, as Libya staged a remarkable comeback.

In a frenetic finish to the match, Libya’s Motasem Sabbou made it 2-1 after 87 minutes, and just a minute later Akram Zuway scored for the visitors to make it 2-2.

However, Guinea had the final word as Alkhali Bangoura hit a winner with virtually the last kick of the game to bring the hosts all three points.

Guinea are third in Group A, behind group leaders Tunisia and DR Congo who face each other in Rades on Friday.

Only the winners of the five qualifying groups will represent Africa at the 2018 World Cup in Russia.